Celebrating the anniversary of the Scott O’Grady Rescue

Today’s post is different than most- given all of the angst raised by the SGT Bergdahl prisoner exchange, I thought that it would be worth reminding all Americans of a special moment in our military history. You see, today is a day worth celebrating- the anniversary of the day that we brought home Scott O’Grady. Many thanks to the intrepid Marines in his rescue party, as well as all of the soldiers, sailors, airmen and intelligence operatives who worked tirelessly behind the scenes to make that moment happen. Bravo Zulu, one and all- 19 years later, your efforts have not been forgotten.

For those who may not remember, Scott O’Grady had been one of the pilots involved in the Banja Luka incident- in which American fighters engaged and shot down four Serbian light attack jets. While O’Grady was not one of the two pilots credited with kills that day, it is doubtful that he would have fared well if captured by the Serbians. 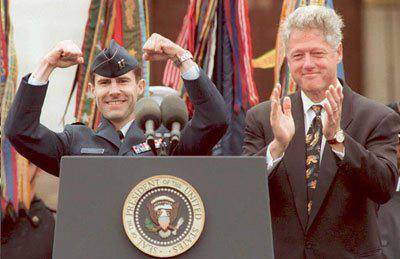 By John Gately | Published June 8, 2014 | Posted in Uncategorized | Comments Off on Celebrating the anniversary of the Scott O’Grady Rescue

We will respond to your inquiry in a timely fashion. Thank you.